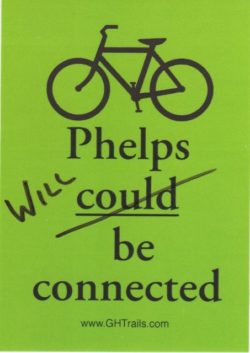 “The news about bike trails in eastern Vilas County is good, very good and to be determined,” says Jeff Currie, president of Great Headwaters Trails (GHT).

The good news, says Currie, is that 9 miles of the 11 mile Conover-Phelps Biking and Walking Trail are now complete and ready to be enjoyed this spring.

The very good news has lots of parts –

Ride with Leinie on June 23 will center around the bike trail in Land O’ Lakes. It offers a 12-mile option and a 38-mile option including a ride on the trail and a road ride around Sylvania Wilderness. The event includes a brat and Leinenkugel beer lunch at the Forest Lake Country Store and prize drawings, including a raffle for a bike and a paddleboard, hosted by Dick Leinenkugel. More details are available at the Wilderness Lakes Trails web site, www.wildernesslakestrails.org.

In Eagle River, the 4th annual SepTimber Ride on Sept. 8 will give adult riders an option of a 26-mile ride on the Three Eagle Trail or a metric half-century (50km/30 miles) road ride looping from Eagle River up through Conover and back. Both rides begin and end at Tribute Brewing Co. where a brat lunch will be paired with Tribute’s craft beers. Drawings for door prizes and the winners of a fat tire bike, a kayak , a mountain bike, and other prizes will also be held during lunch. SepTimber Ride is put on by the Eagle River Area Chamber of Commerce and Great Headwaters Trails. Proceeds go to further bike trail development in eastern Vilas County.

The “still to be determined: part of the news is how much further bike trail development will go in eastern Vilas County. The last two miles of the Conover-Phelps Trail remain to be completed, and three more important bike-ped trail connections still need to be built.

To Great Headwaters Trails, the signs look good for getting that done.

GHT officer Mike Robillard points to the vivid increase in support for area bike trails, cooperative work with area municipalities and the county, and the growth of Great Headwaters Trails itself as key factors at play to address those challenges in the coming year.

In the last two months alone over $100,000 was raised to complete the Conover-Phelps Trail, and more than 100 new donors have added their support. The $260,000 2-mile project is now more than 50 percent funded.

The county’s Forestry, Recreation and Land Committee is in the middle of developing a countywide recreational trail plan which incorporates consideration of all the existing and proposed motorized and nonmotorized trails and routes.

That plan will include the three GHT bike-ped trails that remain to be developed.

The third is the River Trail that will connect all of the eastern Vilas trails to the well-established and highly popular Heart of Vilas Trail System. GHT has done a lot of groundwork on the important River Trail connection. That includes production of a well developed and detailed conceptual plan, sharing ideas with officers of the Sno-Eagles, and meeting with officials from Eagle River, Lincoln, Cloverland and St. Germain.

GHT’s main goals for 2018 are to to lay a firmer foundation for proceeding with River Trail development and to acquire the funding needed to bring the completed Conover-Phelps Trail right into downtown Phelps.

Across the county “businesses, residents and visitors benefit greatly from available bike riding opportunities. The areas with family-friendly trails are especially attractive to those who want safety and convenience and who appreciate connections into the towns and to campgrounds, beaches and other recreational and commercial sites,” said Mary Van Grinsven, a leader in UpShift, Boulder Junction’s local trail support group.

In the eastern end of the county “our intention is to keep a good thing going by helping the towns here gain more bike-ped trail and be more connected into the overall countywide trail system,” said Currie. “We have volunteers with training as accountants, engineers, business people, teachers, lawyers and more, and our volunteer pool is growing. Our board gained three new directors last year and is the strongest its ever been. And our financial supporters now number over 700 individuals, businesses and foundations, and that number is also growing.”

“We are an all-volunteer organization that does big things,” says GHT board member Barb Helmick. “We need people who want to pitch in by taking on one-time tasks or by being part of long-term projects. On our web site’s ‘Get Involved’ page you can tell us about your skills and what you might be interested in doing to help.”