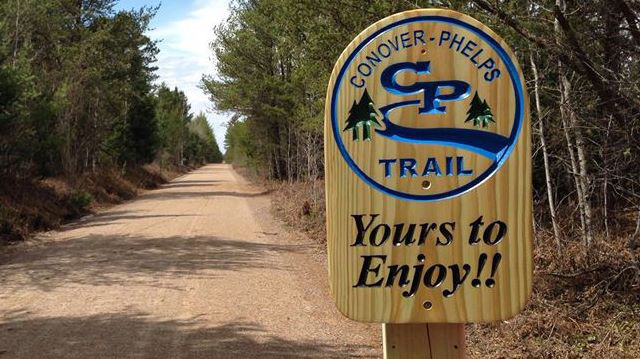 Work to complete the Conover-Phelps Biking and Walking Trail is well underway, and the $50,000 Trail Opening Campaign is underway too.

Trail construction on the steep banks north of CTH K and the area above and below Military Creek along CTH E is being handled by crews from Janke General Contractors. When their work is done by midsummer, the trail will lead right into Lakefront Pines Park at the eastern tip of North Twin Lake in Phelps. The completed 10.6 mile trail is well away from highways, routed through the woodlands and wetlands between Conover and Phelps.

A $25,000 Challenge Fund will match dollar for dollar all donations made to the Trail Opening Campaign by the end of July. The campaign is being launched to handle construction wrap up costs and to establish a long-term Support and Enhancement Fund for adding amenities to the trail.

The trail is owned by the towns of Phelps and Conover. To build their trail, the towns worked with Great Headwaters Trails (GHT) a local, all-volunteer non-profit which raised all the funds for construction and took on important roles in engineering and oversight. “We are very happy that the whole trail will be in place in just a month or two,” said retired engineer Carlton Schroeder, one of the two GHT volunteers helping with construction oversight.

“It’s a special trail with many amenities already, and we want to keep making it even better as time goes by,” said GHT board member Neal Adams. Adams is a Conover resident who coordinates the trail’s Friends of the Trail group.

The trail’s current amenities include mile posts and trail signs, a trailhead in Conover Town Park with a bike repair station, boot scraper and interpretive sign about Invasive Species, a memorial bench, a donor box, and a list of all donors to the trail as of last summer posted on the kiosk there. In addition the trail has a rest area mid-trail and 10 interpretive signs about plants and animals and the railroad that used the grade on which much of the trail has been built.

Plans for new special touches include a similar trailhead in the park in Phelps, additional interpretive signage about the geology of the area around Phelps, additional rest areas, and tribute benches. A rest area north of Military Creek will honor all those who donated to get the last section of trail completed, including contributors to the Trail Opening Campaign.

All trail donors will also be listed on permanent displays at the trailheads in both Phelps and Conover.

Work on the trail is expected to be done by late June or early July. “The Town of Phelps and Great Headwaters Trails are now considering when a ribbon-cutting celebration can be held,” said Phelps resident Rollie Alger, GHT project manager.

Those who want to contribute to the Trail Opening Campaign can do so online at www.GHTrails.org or use a mail-in donor form available there.